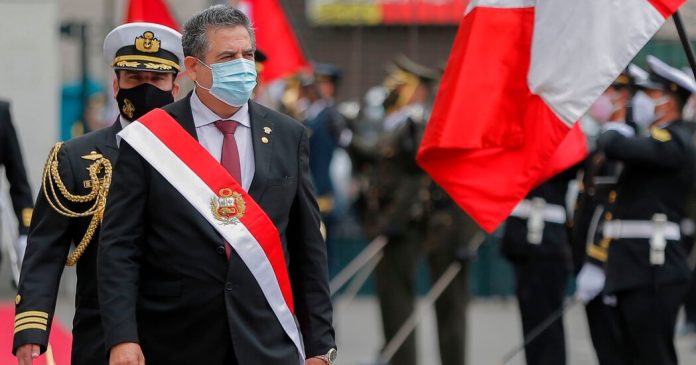 The president resigned after a tragic day of protests and the request of the Board of Spokespersons to leave the office.

Peru’s interim president Manuel Merino has resigned after a violent crackdown on protests that left at least three people dead followed by an exodus of his cabinet members.

“I want to let the whole country know that I’m resigning,” Merino said in a televised address on Sunday, sparking wild street celebrations in the capital Lima after protests against his rule.

Merino stepped down immediately after Peru’s head of Congress, Luis Valdez, said that all of the legislature’s political parties had agreed to ask for the “immediate” resignation of Merino in an emergency Congress session. Valdez said the legislature would begin an impeachment process if Merino did not resign.

The meeting of the leaders of the nine parties in Congress was called by Valdez, who said that the situation in Peru had become untenable after the police crackdown.

PROTESTS IN THE STREETS

Thousands of people took to the streets in days of protests against Merino after the removal of his popular predecessor Martín Vizcarra, who was accused of corruption.

Three protesters were killed during a massive and peaceful march in Lima, which was violently repressed by the police firing shotgun pellets and tear gas.

The second national march on Saturday was the sixth consecutive day of demonstrations that have been taking place in cities across the country since Manuel Merino assumed the presidency on November 10.

This wave of discontent in Peru had its origin in the removal of Vizcarra and produced an intense day of protests that led to a political crisis.