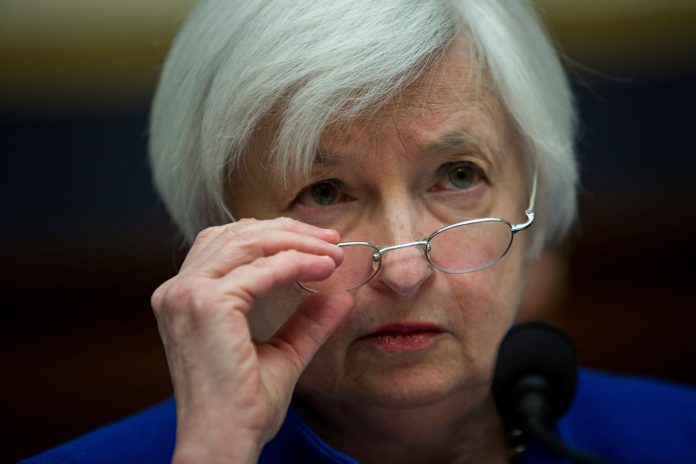 Joe Biden elected Janet Yellen to be the first woman to serve as the US Treasury Secretary. One of Yellen’s roles will be to negotiate US economic policy.

Former Federal Reserve (Fed) officer Janet Yellen was chosen by the elected President of the United States of America (USA), Democrat Joe Biden, for Secretary of the Treasury, and will be the first woman to hold this position.
The news is advanced by the Associated Press (AP), which confirmed the information with a source, who requested anonymity, familiar with the process of choosing Biden’s team members for the next four years.
Yellen, who is an admired figure in the financial world, will be the first woman to lead the Treasury Department.
As Secretary of the Treasury, Yellen will begin the first four-year term of office of the Biden administration with the US economy weakened due to the pandemic.
Unemployment that has soared , the replacement of mandatory confinement measures in several US cities to mitigate the spread of SARS-CoV-2 and the uncertainty that is dominating the markets are obstacles that Yellen will face from the end of January.
Janet Yellen, 74, who was also the first woman to head the Fed (2014-2018), was one of the presidential advisers to Biden’s candidacy.
Among the functions of the future Treasury Secretary will be the negotiation of the United States’ economic policy with Senator Mitch McConnel, a Republican elected by Kentucky, who will continue to be the leader of the Republican majority in the Senate.
Also, this Monday, Biden will have chosen Antony Blinken to lead US diplomacy and John Kerry, a Massachusetts-elected senator, and former presidential candidate, to head the fight against climate change.
Alejandro Mayorkas is going to be the next Secretary of Homeland Security – he already served as undersecretary in this portfolio between 2013 and 2016, in the Obama administration.
Joe Biden is, therefore, taking long strides in the constitution of the next administration, even though the current US President, Republican Donald Trump, continues without admitting the defeat in the November 3 presidential elections and tries at all costs to challenge the results and revert the most prominent states.
The President-elect is going to constitute the team without being able, however, to access federal funds to start putting the strategy he outlined, as the task force to fight Covid-19 since Trump and the current administration are blocking the process of transition of power.